SKATE ON is the GBGB Best Dam of British Bred 2020 – for the fourth year running.

The one-time Oaks runner-up and star sprinter on the track for Liz and Rab McNair has proved one of the outstanding dams of the modern era and a real boost for her owners the K.S.S. Syndicate, led by Brendan Keogh. 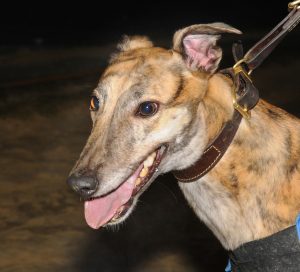 Queen Jessiej landed 14 of her 21 starts in 2020, among them winning the Produce Stakes as well as finishing second in the Oaks. King Drake won the BGBF British Bred Midlands Sprint Trophy and was runner-up in the Kent Silver Salver.

Ten of Skate On’s offspring scored points in 2020, with the likes of older runners such as King Lennon (35) and King Sheeran (27), from her February 2017 litter by the McNairs’ former track star Eden The Kid, also playing their part.

The GBGB Best Dam of British Bred award is one which has been dominated by the McNairs and the KSS Syndicate, having also won it in 2016 with Shaws Dilemma.

Another of their broods, Queen Asia (199 pts), finished second to Skate On in the 2020 Best Dam rankings with Kevin Ferguson’s Acomb Ruby (116 pts) a very commendable third.

“Our congratulations and thanks to Brendan, Simon (Senyk) and the McNairs – firstly for their dream of breeding pups in the UK as good as they had been buying in Ireland – and then for their belief and perseverance in carrying that dream into reality. Special congratulations to Liz and Rab who produce and train these litters so very well.

“What can we say about Skate On? What a bitch! We knew she was special on the track – but didn’t realise how special she was going to be! Four of the five finalists in that 2012 Oaks went on to produce litters, but none as successful as she has been.

“So many of her offspring have been outstanding on the track and two of her sons – King Elvis and King Sheeran – are now standing at stud. One was Greyhound of the Year and the other British Bred Greyhound of the Year – and Queen Jessiej has now emulated her mum by finishing second in the Oaks. When the time comes, she’ll be another real boost to the breeding paddocks.

“Well done also to Queen Asia for the same connections, who was runner-up in this category. This is another special achievement given she was bred and reared by the KSS/McNair combination out of one of their first broods and one-time Best Dam herself Shaws Dilemma.

“Big congratulations to Kevin Ferguson for coming a close third in this category with Acomb Ruby. She had one litter of five pups by Hiya Butt, but goodness it’s an impressive litter with all five having gone on to win races.

“Thank you to GBGB for sponsoring this valuable category in the Awards – without good brood bitches there is nothing, and we are lucky we have some really good ones in this country now.”