AAYAMZA EXPRESS heads into Friday’s final as the fastest semi-final winner having made all in the first semi of the Coral Champion Stakes at Romford last week. She will line up as one of two Mark Wallis-trained runners in the £10,000 decider.

“It’s great to have two chances and, in what is a very busy time, nights like Friday really are fantastic. We’ve got runners in the major Category One final on the night Romford officially opens its new grandstand. We’re all looking forward to it.” 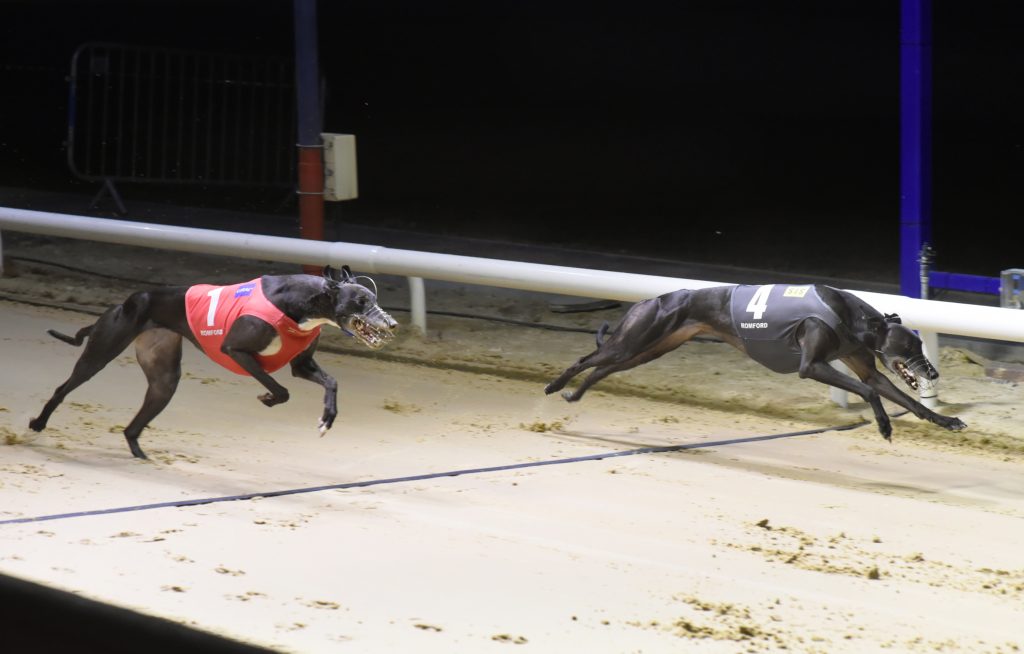 The Wallis-trained Saleen Ash qualified behind Swift Tarquin (35.87sec) in the third semi-final, with the latter trained by John Mullins who sent out the Champion Stakes winner in 2016 in the shape of Ascot Woodie.

Ernie Gaskin’s Newinn Cracker won the second semi-final to give his handler Ernie Gaskin a chance to emulate his father’s success in the competition back in 1992 with the popular Chic Mona. Ten More (Seamus Cahill) qualified here in second.

Of Friday’s final, Wallis added: “It’ll be interesting to see if Aayamza Express can come away inside. She’s been running so well from the middle, but it’s great to see her running so well given she’d been off the track for a long while.

“She came over from Ireland as a real prospect but needed time, and then came in season, so she’s a work in progress I suppose. Having said that, she can win from the front or off the back, and we’re thinking Doncaster and Perry Barr St Legers for her.

“Saleen Ash is a great campaigner. He was fortunate to qualify, but always has a smash break in his locker and is capable of a 35.20sec. He’s a veteran now but made the final last year – finishing third behind our Bombers Bullet. He’s got trap six which is perfect, too.”

Stadium manager Karen McMillan said: “There were certainly a few surprises in the semi-finals, but we’re left with a really competitive final which makes for a real spread of opinions which is great on a big night for us on Friday.

“It’s been mad busy, but has been here since the plans were first drawn up. It’s been two years of hard graft, and there will still be changes made as we go along, but those that used the facilities at the weekend have given us some really positive feedback.

“Indeed, the ‘soft launch’ went well and now it’s about fine-tuning things again for this week  – and on the track it’s a particularly big night with not only the Champion Stakes Final but the TV Trophy heats, too – and that’s an event we’re really proud to stage this year.

“The TV Trophy has a great history and that will be reflected in a special racecard we’re aiming to produce this week. The background of the stadium will be touched upon also given this is another chapter written in Romford’s history this week. Roll on Friday.”