AAYAMZA EXPRESS landed her owners the Ayamzaboys Syndicate a second Category One event of the year and helped her handler Mark Wallis close the gap at the top of the GBGB Trainer of the Year race when winning the Coral Champion Stakes at Romford on Frday.

The £10,000 decider shared the stage with the heats of the Coral TV Trophy as the London Road track celebrated the Grand Opening of its new grandstand with a gala sellout night. The grandstand was officially opened by Mayor of Romford Michael Dean Burton and local MP Andrew Rosindell.

However, it was on the track where trainer Wallis celebrated his fourth Champion Stakes victory courtesy of the June 2016 daughter of Skywalker Puma and Kilcotton Kate, who showed good early pace to hold the rails position and sweep to the first off the first bend, after which she was never headed.

Keeping up a strong gallop on the back of a 13.67sec split, Aayamza Express (pictured, T1) was always holding sway as the three-year-old crossed the line two-and-a-quarter lengths clear of the Seamus Cahill-trained Ten More (pictured, T5) in 34.90sec for the 575m, much to the delight of connections – with special praise reserved for Karol Ramsbottom. 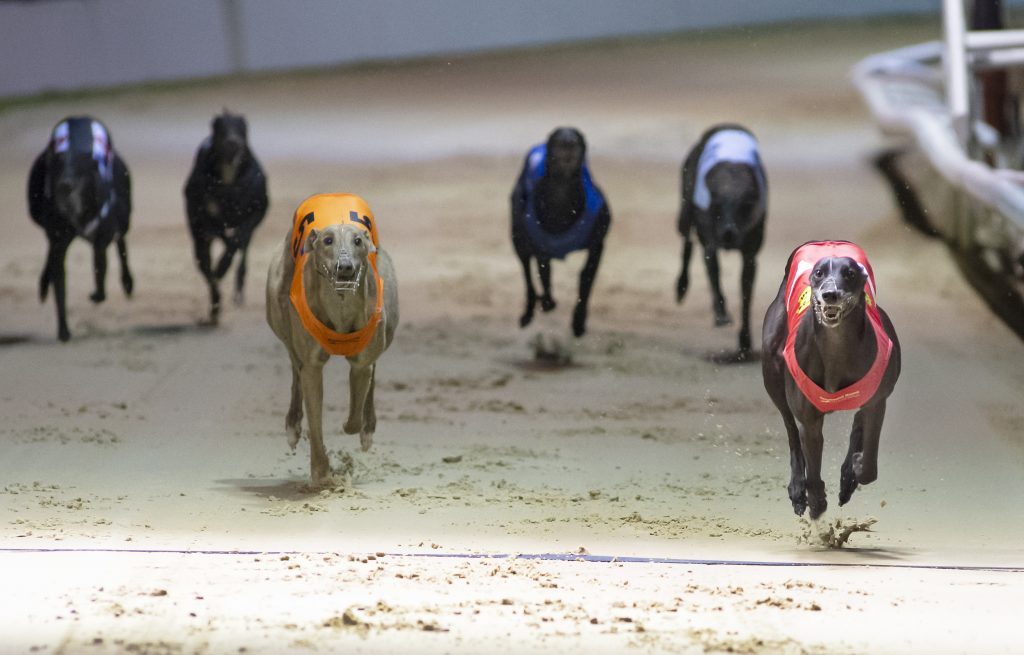 “Karol sourced her in Ireland and then, after she suffered an injury, nursed her back to health – so he must take huge credit, as should our genial physio Ron Mills, who continued that great work which has paid off handsomely,” said Wallis afterwards.

“The lads who own her had to be very patient with her,” he added. “She was off almost a year, but she had two seasons during that time and is now making up for lost time.

“She doesn’t have many miles on the clock and we’re pretty sure she’ll stay well. We’re thinking about the Yorkshire St Leger at Doncaster and Perry Barr St Leger for her and hopefully she’s not finished yet in terms of big races! I’m just delighted for the lads – they waited a long time for Cat One – now they’ve had two in four months or so.

“It’s topped off a fantastic night here. We’ve seen the work they’ve done here, and wanted to have a runner in the final – so to get two with Saleen Ash qualifying was great. There’s a real buzz and it’s great to get that back. Well done to Coral and to the management at Romford – they’ve done the sport proud.”

Nigel Smith, who heads the Ayamzaboys Syndicate with Mitch Brennan, said: “I was always confident she’d go well. If she could break and hold her position it was definitely game-on. We’ve all had to be patient but well done to Mark and his team and to Karol (Ramsbottom), who did a great job getting her back.”

Mitch Brennan added: “I linked back up with Nigel about ten years ago and, while we’ve had a good few winners, we’d not managed to get a Cat One – then Aayamza Breeze won the Regency and she’s got a chance in the TV Trophy Final now. It’ll not be easy, but she’s a great bitch who owes us absolutely nothing. You never know.”

Mark Arkell, Romford’s racing manager, commented: “It was a really impressive performance from Aayamza Express. She saved her best run for when it mattered most, avoiding trouble at the first bend to secure the win. Ten More ran on really well in defeat in my opinion, however.

“It topped off a great night at the track as part of our Grand Opening. We can now look forward to the TV Trophy Final – and, with Aayamza Breeze – Mark and his owners will be looking to land a famous double! On the same night we also have the heats of the Coral Puppy Cup, too. Entries for that close on Tuesday at noon.”