Greyhound racing has a proud history in this country; it is a sport which is an intrinsic part of our national landscape linking generations of families. Simon Franklin’s family is one such family that has passed their love of greyhounds and racing down from generation to generation.

Here the Yarmouth Promoter and GBGB Board Director describes his family’s involvement in the sport and how it has been a trailblazer for greyhound welfare. 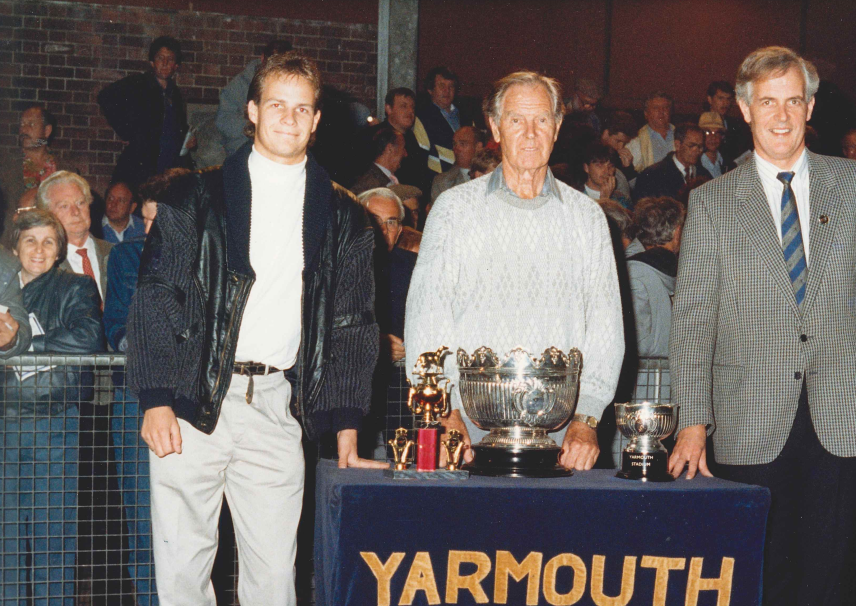 “My family’s greyhound racing story begins in the 1930s after my Grandfather, Len Franklin, who lived in Essex, went to the then ‘new’ sport of greyhound racing in London.  He became a successful professional gambler, regularly attending his two preferred tracks in London.

After going on summer holidays to Great Yarmouth, he became aware of a greyhound racetrack just outside the town at Caister-on-Sea.  The track had no facilities but Grandad and his friends decided to purchase the license and negotiated with the local landowner to build a proper stadium on the main road between Great Yarmouth and Caister-on-Sea. 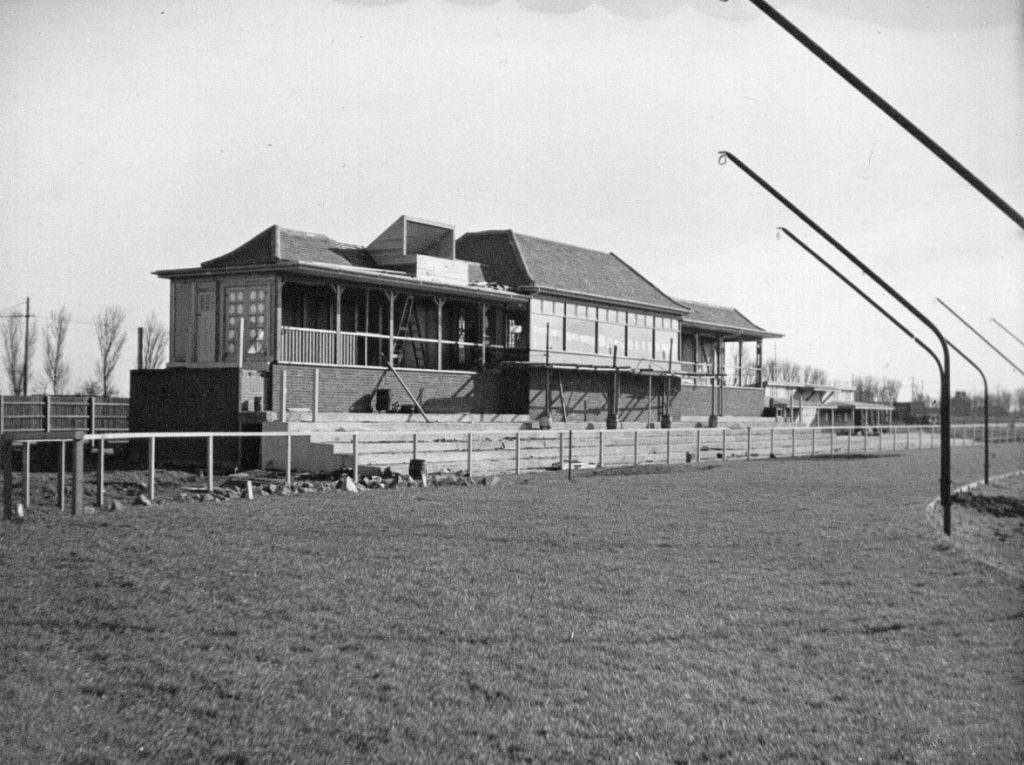 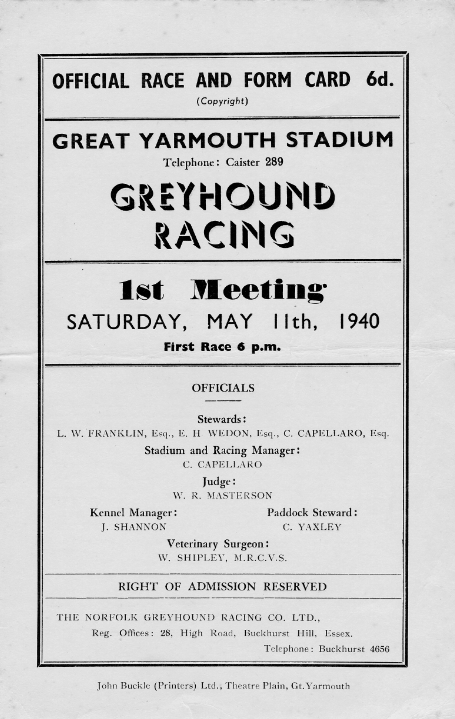 Construction of the new stadium was completed just as the Second World War intensified.  The first race meeting was held on Saturday 1st May 1940, the day the end of the local pier was blown up to impede invasion!  Only a handful of meetings were held before it was forced to close, as all the staff were `called up`.  When those who survived the war returned, the site was cleared, having been requisitioned during the war, and the stadium re-opened on Saturday 7th December 1946. 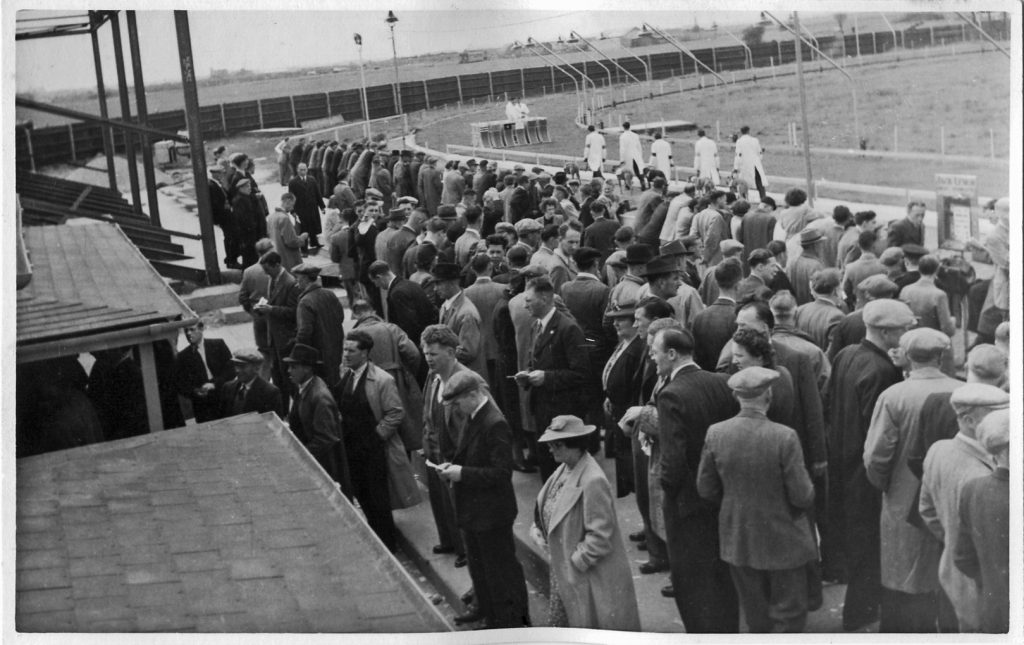 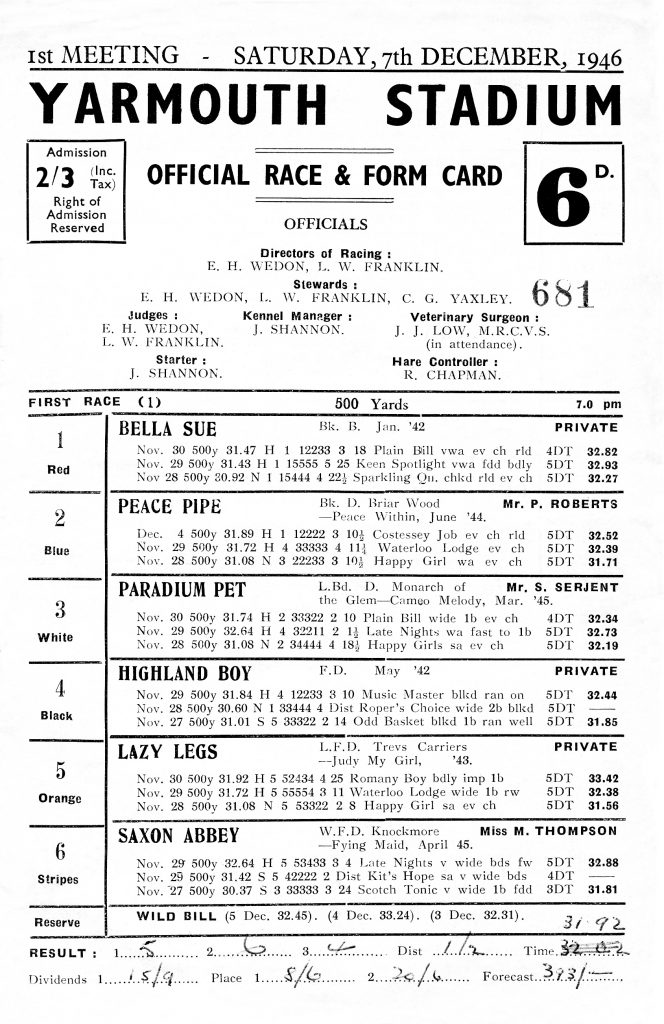 A multi-faceted business such as a stadium, especially one in a busy seaside resort, always has areas where the commitment of family members is invaluable.  During school holidays family members were called upon to help.  At the age of just nine or ten, my dad, Stephen, helped out in the kennels that was attached to the stadium in those days although he recalls his Dad didn’t pay him that well!

After completing a course in Catering and Hotel Management at Norwich City College, Dad joined the stadium staff full time.  A few years later his elder brother Martin returned from South Africa and joined the team.  Uncle Martin left the business in the 1980s and when Grandad Len eventually retired, Dad took full control, ably assisted by my Mum Pamela.

History repeated itself with the next generation when my younger brother Justin and I, having done all the holiday jobs, joined the Stadium full time.  I now look after all aspects of the stadium, including managing all our office teams, covering race meetings and overseeing track safety.  Justin takes care of marketing and manages our award-winning Raceview Restaurant and Executive Lounges.

Today the Raceview Restaurant, three Raceview bars and three executive boxes give Great Yarmouth a much needed, year-round attraction which is a huge draw for people to come here.  We’re the town’s largest evening entertainment venue and as well as greyhound racing we’ve held Spedeworth International’s stock car racing here since the 1960s.

Whilst holidaymakers are a big part of our business, we have lots of regulars who I chat to week after week when overseeing the turnstiles.  There’s a strong community spirit at our stadium and it’s particularly great to see how popular the dogs are with families – we often have around 150 children here on race days during the summer.

At Yarmouth, welfare of our greyhounds has always been our highest priority.  My Grandad Len would have been aghast seeing seven people stood outside his stadium on a Saturday night telling him he didn’t care about the welfare of greyhounds.  From the very first meeting in 1940 he ensured a vet was in attendance, which even in those days was not an inconsiderable cost.  We have had a vet at every race meeting since to ensure our racers are fit and healthy.  In fact, Grandad was much more in love with the greyhounds and their racing talents than the business side of the stadium – but he realised he needed the business side to fund the racing!

In 1999, after a meeting with one of our racing owners, Steven Gray, who was supporting greyhound homer Mandy Hooker, in Lincolnshire, Dad suggested that we should form our own re-homing organisation, Yarmouth Greyhound Homefinders.

The group had a very dedicated fundraiser who managed to raise sufficient funds to start offering veterinary assistance to meet the costs of treating career-ending injuries.  We were pleased that other tracks soon followed suit offering similar schemes, paving the way for GBGB’s national Injury Recovery Scheme.

Yarmouth Stadium is also wholly committed to finding greyhounds suitable, loving homes at the end of their racing careers.  Our Homefinders programme is something my family and the whole team are hugely proud of.  We’re incredibly thankful to the few but wonderful staff and the hundreds of volunteers who help make the scheme a reality, based at our rehoming kennel, on the A140 Cromer Road in Hainford, Norfolk.

The Homefinders volunteers are a major part of Yarmouth Stadium and they are often found on the turnstiles or restaurant entrance with their retired greyhounds – fundraising, answering questions and showcasing what fantastic pet greyhounds make.

The stadium’s success is testament to my Grandad and Dad’s tireless energy, enthusiasm and hard work.  Not only have we greatly contributed to the local economy, helping finance students through college and university with part time jobs, as well as providing many full time jobs, we’ve also supported local tourism.  And we have done this whilst fully upholding the welfare of our greyhounds.  Dad, who retired ten years ago, is still very much involved in the stadium, like his father in turn; it’s a family commitment that you can’t escape from.

But, for me, it isn’t just about continuing the legacy and running a successful business; it is also about the love of greyhounds and seeing them do what they do best.  I am incredibly proud of the contribution our family has made to the sport through, Yarmouth Stadium, over the past 75 years.”