The Greyhound Board of Great Britain is delighted to announce that the K.S.S. Syndicate are the Coral Owners of the Year for 2020. 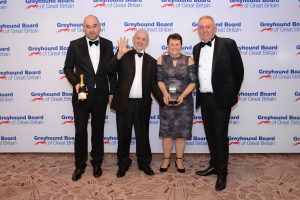 Their team of greyhounds, trained by Liz and Rab McNair at their base in Ashford, Kent, amassed a huge 594 points, finishing ahead of Evan Herbert (254) and Kenny Glen (222).

The Owner of the Year is awarded to the owner or owners whose greyhounds have collected the highest number of points based on the same scoring system as used to decide the Champion Trainer.

The Produce Stakes winner also finished second in the Oaks at Swindon, plus made the finals of both Monmore’s Puppy Derby and Gold Cup. Individually she scored 150 points.

“Congratulations to Brendan and Simon (Senyk) and, of course, Liz and Rab (McNair) for their great success again in 2020. Their greyhounds continue to do them proud – and have done so for many years. The fact they’re largely breeding all their winners also makes this sixth Owner of the Year award very special – fair play to all the Kings and Queens!

“Mention should also be made of what Evan Herbert and Kenny Glen achieved with their greyhounds last year – Desperado Dan was a real star for Evan last year and, of course, Kenny won the Derby with Deerjet Sydney.

“Owners play a critical role in our sport and their patience and loyalty over the past year cannot be understated. We very much hope that, once the Lockdown restrictions begin to ease, owners will be able to return to the track to see their canine athletes perform once again. ”