ICE ON FIRE (pictured below, t3) landed the odds in the Stadium Bookmakers Puppy Classic Final at Nottingham on Monday – and a return to the Colwick Park venue for the Eclipse in November is on the agenda.

Making all in the £6,000 final with another devastating show of early pace, the Jimmy Fenwick-trained, Dave Spraggon-owned racer was never headed as he crossed the line a length ahead of the gallant Headford Ranger (Kevin Hutton) in 29.39sec, with the strong Roxholme Dolly (Hayley Keightley) the same distance back in third. 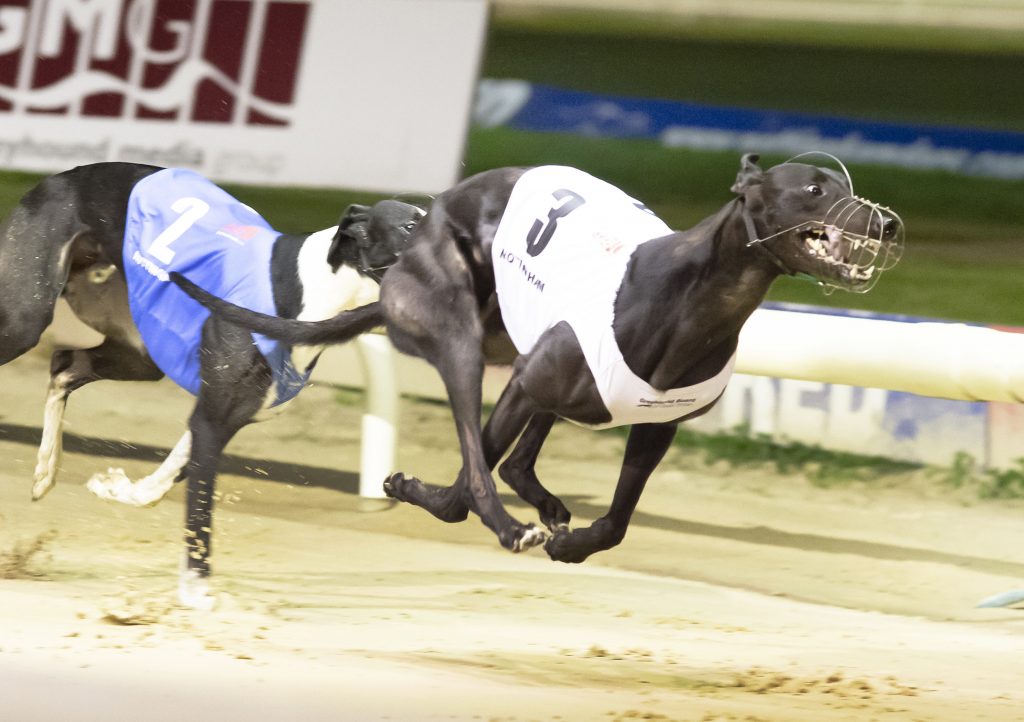 “It was a really classy final, and we’re delighted to have won it,” said Fenwick, whose wife Melanie paraded the exciting October 17 son of Crash and Bigmans Grainne.

“We’ve always thought the world of him and right from the start he’s never disappointed. He won his first five races and his first defeat was in the puppy final supporting the Derby – and he had trap six then behind Trickys Dumbo.

“This dog has lethal early pace so when he comes away he’s tough to hold and we’re all enjoying the ride!” added the Newcastle trainer. “Myself and Mel were delighted to get him from Dave (Spraggon). Gerry McCusker bred the litter and they’ve turned out a cracker with a good few winners.

“Dave retired as a trainer about three years ago. He still loved the dogs, but the schedule was becoming too much and he retired – but I think he’s loving things as a leading owner now! He and his wife Pat were at Notts on Monday and we had a great night – topped off by winning the Puppy Classic.

“That’s his eighth win now in 11 starts and, given he runs Nottingham so well, we’ve got to think about coming back for the Eclipse – but there’s also the All England Cup at our home track Newcastle and the Romford Puppy Cup,” added Fenwick on possible options for the youngster.

“In fact, we’ve booked him in for a 400m trial at Romford on Tuesday,” revealed the winning handler.

Nottingham director Nathan Corden congratulated the winner, commenting: “Ice On Fire did what he needed to do, breaking well with a 4.87sec split, and after that it was all about who turned second and whether they could pick up the leader.

“Headford Ranger and Roxholme Dolly are very strong, so Ice On Fire was kept up to his work! Congratulations to Jimmy and Melanie Fenwick, who were made up with the victory.

“I’m sure we’ll be seeing the majority of the finalists compete for honours in the major four and six-bend competitions next year and, of course, the Eclipse here in November.”