Greyhound lovers across the country were thrilled to see a retired greyhound feature on Wednesday night’s episode of Paul O’Grady’s ITV show ‘For the Love of Dogs’.

The programme followed the story of retired racer Sidney as he entered Battersea Dogs Home and found his forever home in Croydon. Viewers were shown how Sidney was being helped make the transition from kennel to home by being introduced to new household noises such as a hairdryer and hoover.

The programme showed off greyhounds’ gentle, friendly and compassionate nature as Sidney successfully interacted with smaller dogs at the centre.

No one watching the programme could not but be totally in awe of greyhounds and be impressed by their brilliance as family pets. Paul O’Grady himself couldn’t praise Sidney more and described him as a ‘model greyhound citizen’. Paul went one step further and encouraged his viewers to consider rehoming greyhounds. 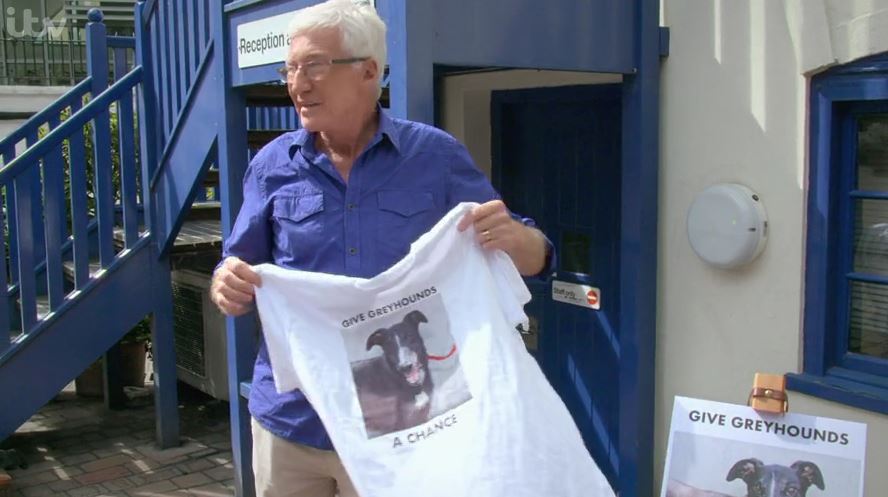 “It’s so sad to hear many people who come to us to rehome say they don’t want a Greyhound – in many cases, because they think they need too much exercise and because they’re not seen as ‘cute’ like other dogs. The truth is, Greyhounds are often the canine equivalent of a cat. I’ve met so many who love to spend hours snoozing on the sofa and are very loving and gentle.

“Sidney is a really sweet-natured dog who loves snuggling down under a blanket and playing with cuddly toys.

“We were so pleased Paul took up the mantle to encourage people to rehome Greyhounds. We want people to come to the rescue with an open mind rather than relying on clichés about breeds that are often outdated and untrue.”

“It was with delight that I switched on Paul O’Grady’s ‘For the Love of Dogs’ this week to see ex racing greyhounds being featured. It’s wonderful that Paul was able to showcase them in this way by encouraging viewers to offer them forever homes and that all important comfy sofa – fantastic job!”

The programme can be seen on the ITV Hub here: https://www.itv.com/hub/paul-ogrady-for-the-love-of-dogs/2a1672a0070