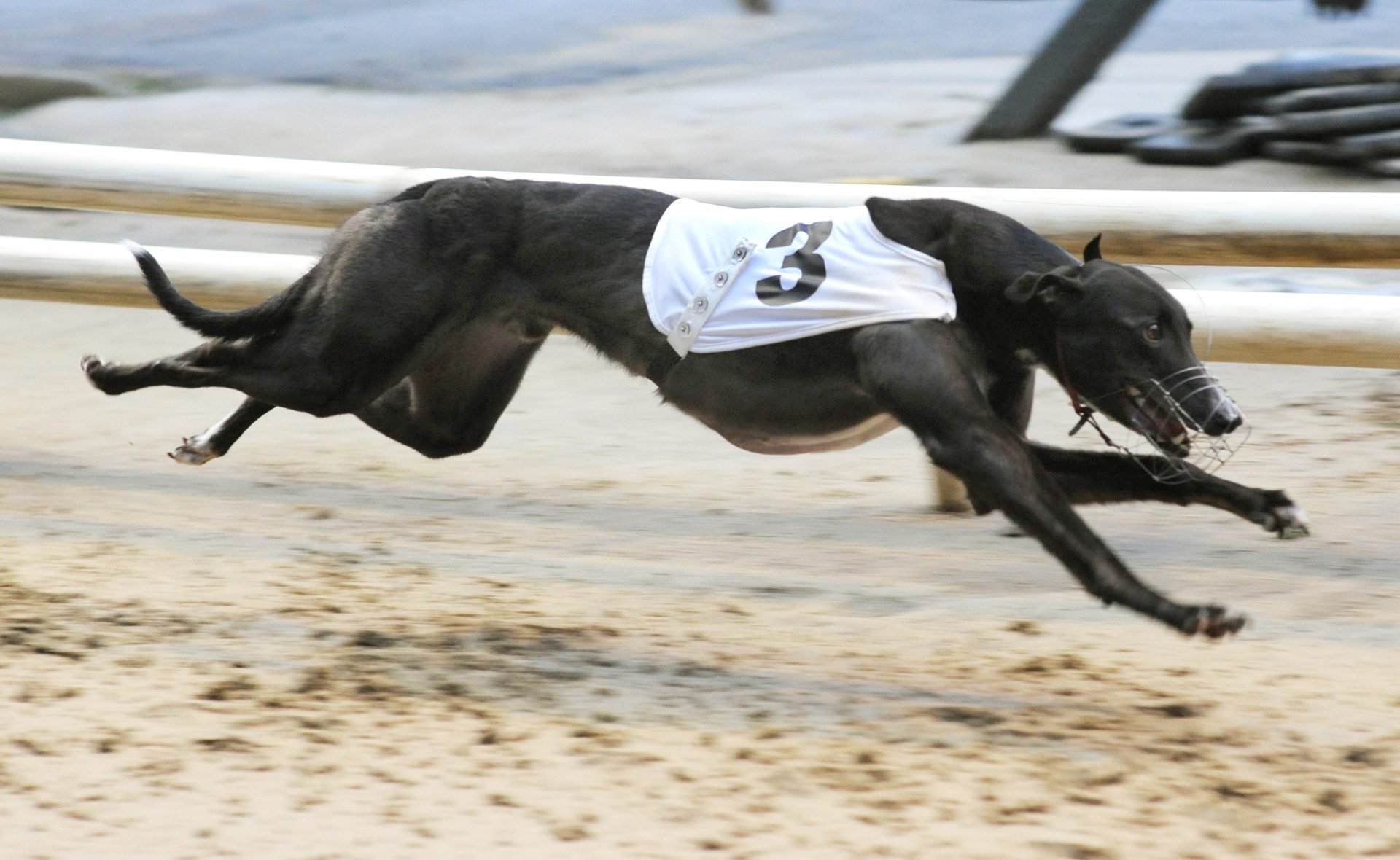 BARNFIELD ON AIR was the best of his generation, an extraordinary greyhound.

But it wasn’t always like that. Barnfield On Air had to prove the hype was real, before being widely appreciated. Expectations were high, but they say class will always out – and it certainly did for the brilliant February 2005 son of Pacific Mile and Always On Air.

Not since Ballyregan Bob landed on these shores had a greyhound arrived with such a lofty reputation from Ireland. A big-money purchase, the dog formerly known as On Air Always had looked a rare talent with fast wins at Thurles, Newbridge and Harold’s Cross.

He reached the 2006 Irish Puppy Derby Final at the Dublin venue, but a troubled run in the decider denied him and he headed for the Essex kennels of his new trainer Sam Poots, who owned him with other members of the ‘Barnfield Trio’, Darryl Bear, Mark Hodgson and Steve Murphy.

Beaten on his UK debut at Coventry, he won second time up time at the Brandon venue, but victories and defeats came in equal measure for Barnfield On Air in those early weeks and months – before attention turned to the 2007 Greyhound Derby at Wimbledon.

Preparatory trials were impressive and he duly won his first round heat as he led home Monmore Puppy Derby winner Blonde Dino. However, even at that stage, connections felt Wimbledon was not his track and a slow start proved costly in the second round.

Unable to recover, Barnfield On Air exited the Classic. It would be the first of three Derby campaigns at Wimbledon, the ‘Barnfield Trio’ taking the attitude there was only one Derby and sportingly allowing their star to take his chance – and he did go close in 2008.

Arguably the making of Barnfield On Air came in his next race after Wimbledon – at Hove – a scintillating 29.32sec which showed the shape of things to come. A third place back on Wimbledon on Derby final night, again when favourite, proved a mere blip.

Returning to Hove for the Sussex Cup, Barnfield On Air came of age. Victories in his heat, semi-final and final culminated wth one of the great runs ever as the Poots-trained flyer blitzed his field, leading home the previous year’s Scottish Derby champion Fear Me.

And the time? A brilliant new track record – 29.20sec – a time which still stands today.

Greyhound racing had a new superstar and, while the exceptional Cleenas Lady reeled in him in over 500m after an interrupted preparation – incidentally the winner was completing her own historic Select Stakes double – Barnfield On Air was back in track record-breaking form at Walthamstow with a 28.15sec triumph for 475m.

Two more track records followed in the heats (27.32sec) and semi-finals (27.20sec) of the Laurels at Belle Vue – that last, breathtaking time still stands today – although his domination of the event came to a disappointing end for connections with an unlucky-in-running second in the final.

Coventry’s 480m best was next to fall to the incomparable Barnfield On Air as, on route to winning the Blue Square 480 Cup Final – effectively the Coventry Derby – a 28.85sec second-round triumph thrilled racegoers at the Midlands venue.

Injured Jockeys’ Fund night at Walthamstow was always one of the major nights of the year at the famed Chingford Road venue. The stars off the track – Frankie Dettori, Vinnie Jones, John McCririck, Peter O’Sullevan et al – matched those on it.

Barnfield On Air was one of those and he made no mistake, much to the delight of his legion of fans and owners. It was the perfect way to see out 2007 as connections set their sights on the ‘impossible dream’ – a crack at the three Derbys in 2008.

Shawfield for the Scottish Derby, followed by Wimbledon and the English version – despite reservations about his suitability at Plough Lane – and then Shelbourne Park for the Irish Derby. A grand plan but Barnfield On Air’s star was in the ascendancy.

Regular updates in the trade press were one thing, but now the wider media began to take notice.

The Daily Mirror described him a greyhound racing’s ‘wonderdog’ and the Observer, comparing him to Mick the Miller, headlined a piece about him being: ‘A rabbit’s worst nightmare . . . so quick he could become a national treasure’.

Named GBGB Standard Distance Dog of the Year in 2007, Barnfield On Air missed out on the Greyhound of the Year to St Leger champion Spiridon Louis. His fans still find that a tough pill to swallow, but greyhound racing had two champions in its midst.

Come 2008 and the triple crown bid fell at the first hurdle effectively, bundled out of the Scottish Derby at the semi-final stage as slow starts proved an issue in Glasgow, but hopes were raised for a successful Wimbledon campaign with some eye-catching trials.

Barnfield On Air ran well at Wimbledon in that year’s Derby, albeit connections will argue only his class saw him reach the semi-finals at a track which failed to play to his strengths – unlike Hove, where he headed next for his Sussex Cup defence.

Third place in the semi-finals after a crowded passage cost him a place in the final, but now that prestigious one-off, the Select Stakes, called back at Nottingham and, against a top-class field, Barnfield On Air produced one of his best performances.

As part-owner Darran Keefe said: “It was an outstanding line-up. Ninja Jamie, Bubbly Totti, Farloe Reason, Droopys Carvalho and Cleenas Lady. He bolted clear and was three in front at the first bend. It was great for the dog, and for us.

“In many ways, though, he was an unlucky dog. He was beaten in the Laurels final after terrible trouble and then in the first Select Stakes he was involved in a no-trial at Nottingham, went over the hare rail, was battered and bruised, and short of work.

“In the circumstances he did well to hold Cleenas Lady to the line, but it wasn’t enough – so it was especially pleased to return the next year at win. Nottingham was certainly one of the great memories we’ll take from a memorable career on the track.

“And who knows, with luck, he might have won the Derby, also. He reached the semis in 2008 and almost got round the bend before being taken out. When I first set eyes on him at Sam’s (Poots) kennels, I called him ‘The Special One’. He was exactly that.”

Barnfield On Air’s career was coming to an end. Stepped up to 575m at Romford he reached the Champion Stakes final, but was injured behind subsequent Greyhound of the Year Lenson Joker and his 2008 campaign came to a close.

Retirement had been considered, but fertility problems would always deny him any stud career and, after seven months off, Barnfield On Air returned to the track in April 2009 with a third Derby campaign targeted by connections.

He won a race at Coventry, showing some of the old fire, but was knocked out in the second round of the Derby. Returning to Plough Lane for a seniors’ race at Wimbledon, a recurrence of a wrist injury forced connections’ hand and Barnfield On Air was retired.

So ended the career of a multiple track-record breaker and winner of the Coral Sussex Cup, Betfred Select Stakes, and Blue Square 480. In all, Barnfield On Air won 27 races and £53,110 in win prize-money alone.

Richard Birch in his Greyhound Greats column paid this tribute: “During an extraordinary five-month spell between July and November 2007, one greyhound dominated Britain’s four-bend scene.

“Barnfield On Air was virtually unbeatable at this time, setting track-records at Hove, Walthamstow, Belle Vue (twice) and Coventry. Given a long run-up and wide track, this charismatic canine consistently produced front-running performances of which Usain Bolt or Dayjur would have been proud.

“He didn’t win a Derby, but few who watched him at the very peak of his powers would begrudge him his place as a Greyhound Great.”

Barnfield On Air enjoyed his retirement at the Peaceful Kennels in Essex, looked after by Olivia and Beth Noble. ‘Jack’ or ‘The Boss’, as he was known, lived live to the full and was just shy of his twelfth birthday when he suffered a freak leg injury.

Due to complications, the kindest decision was taken, and Barnfield On Air died on January 26, 2017. 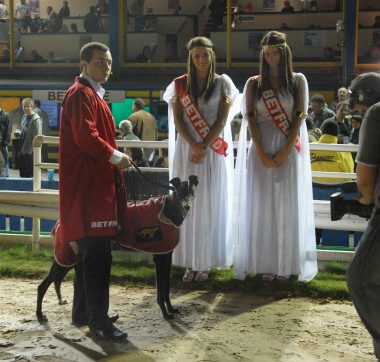