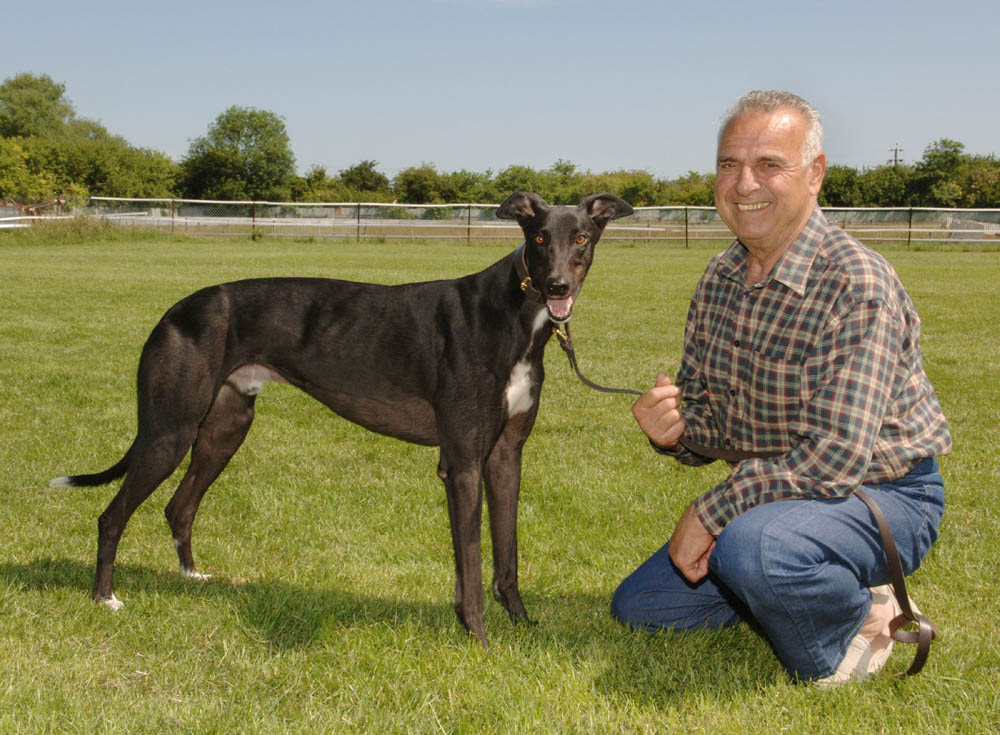 WESTMEAD HAWK was the greyhound of a generation, the closest the sport has come in producing a name to sit alongside those canine luminaries of Mick the Miller, Scurlogue Champ and Ballyregan Bob.

A greyhound so famous he was immortalised by a waxwork in Madame Tussauds and also had an hour-long TV documentary made about him, Westmead Hawk was, quite simply, the most exciting greyhound to have ever graced the track.

Westmead Hawk won the Greyhound Derby in successive years at Wimbledon – 2005 and 2006 – becoming only the fourth back-to-back winner in the competition’s 90 years-plus history following Mick the Miller, Patricias Hope and Rapid Ranger.

However what made ‘The Hawk’ special was his style of running, his famous last-to-first finishes – which wowed racegoers and elevated him to the status of People’s Champion. Crowds came from far and wide to see Westmead Hawk in action.

Bred at the legendary Westmead Kennels in Dunstable, Bedfordshire, by his trainer Nick Savva, Westmead Hawk was owned by Nick’s great friend and longstanding owner Bob Morton – the pair enjoying fantastic success with a host of Westmead-prefixed greyhounds.

Savva and Morton had won almost everything in the sport. However, the Derby had eluded them despite coming close in the finals at White City in 1982 – with Special Account – and with the brilliant Sonic Flight at Wimbledon in 2001.

However, winner of the 2001 Scottish Derby and English Derby runner-up, Sonic Flight is very much part of the Westmead Hawk story – as his sire. Mated to one of Ireland’s top stayers in Mega Delight, the resulting May 2003 litter would rewrite the record books.

Mega Delight, trained for a period by Savva himself, made her name in the hands of the great Irish trainer Seamus Graham with a host of wins. However, so successful as a brood did she become, Mega Delight was later given the name the ‘Million Dollar Mum’.

She threw a host of winners, but Westmead Hawk became the most famous under the tutelage of Savva – ironic given the sport’s most successful breeder had effectively retired from training. It was Westmead Hawk who forced a rethink from the doyen of British breeding.

A May 2003 son of Sonic Flight and Mega Delight, Westmead Hawk had his early races at Hall Green in Birmingham under the guidance of Gary Bakewell and his family. Savva generally sent his youngsters to the Bakewells to gain experience, and it was soon evident here was a star.

His strong finishes impressed racegoers at Hall Green, but what set Westmead Hawk apart was his unnerving trackcraft. He had an in-built ‘SatNav’ system and knew which route to take when it came to passing other greyhounds in the quest to win races.

Unusually for a greyhound set to become a Double Derby winner, Savva sent Westmead Hawk to Monmore – for a six-bend competition – and it was the 630m Summer Classic at the Wolverhamton track which proved the making of the sport’s rising star.

He had run third in the Midland Puppy Derby at the same track just two months before, but Savva was concerned his greyhound lacked experience in all-aged company, so entered him in the race over the longer distance against older dogs to give him a chance to run.

It proved a stroke of genius and the perfect preparation for the Classic successes to come.   Starting at 66-1 chance ante-post for the 2005 William Hill Derby, Westmead Hawk was soon defying those odds – again in swashbuckling off-the-pace style.

He came from way back to win his first and second round heats and, while defeated in the third round after early tangling, still massively caught the eye. Success followed in the quarter-finals before Irish raider Mineola Farloe, who would become a familiar foe, led him home in the semis.

Nevertheless Westmead Hawk started favourite for the final, but would have to do it the hard way given a classy line-up with Seamus Graham’s pair of Mineola Farloe and Blue Majestic, Owen McKenna’s Geldrops Touch, Charlie Lister’s Ningbo Jack and Arthur Hitch’s Blonde Mac against him.

It was the last-named, trained by the popular local handler, who almost caused a major shock – the 33-1 chance Blonde Mac leading his field a merry dance, flying out from trap one and almost escaping in the pack – until the The Hawk pounced.

Knocked back to last early, Westmead Hawk flew down the back-straight and reeled in the gallant leader close home to the roars of his legion of fans on the terraces and in the stands on both sides of the famous Plough Lane stadium.

For Morton and Savva it was a dream come true. After so many years of trying and close calls, Morton now owned an English Derby champion and Savva had bred and trained one in Westmead Hawk – and, at just over two years of age, time was on his side for a crack at 2006, too.

In between those Wimbledon Derbys, Westmead Hawk brilliantly reached the 2005 Irish Derby Final at Shelbourne but was desperately unlucky with the trap draw in the final and was forced wide and out of contention, come home fifth to He Said So.

The following year, Westmead Hawk finished second in the Scottish Derby after a great tussle with Charlie Lister’s Fear Me, but still arrived at Wimbledon in the early summer of 2006 as one of the shortest-priced favourites ever for the Derby.

Wins followed at will, and he achieved the rare feat of running unbeaten through the competition. However, his semi-final performance in 2006 will forever be etched in the minds of Savva, Morton and every single greyhound racing fan.

Producing one of the greatest ever runs by a greyhound, and certainly the most exciting of finishes, Westmead Hawk collared Mineola Farloe in the shadow of the post for a most unlikely of victories – to the disbelief of racegoers and those watching live on Sky Sports.

Listen to Errol Blyth’s commentary again – followed by the 2006 final in which saw Westmead Hawk again caught the front-running Mineola Farloe to the cheers of a huge crowd and large television audience. It does not get any better.

The People’s Champion had done it again and the ‘old lady’ that was Wimbledon Stadium rocked as Westmead Hawk added his name to that rare list for runners to have successfully defended his Greyhound Derby title.

He became the sport’s biggest star, a unique, one-in-a-million talent. And while injury denied him a third crack at greyhound racing biggest prize in 2007 – his half-brother Westmead Lord made it three-in-a-row for Nick Savva and Bob Morton in 2007.

A star at stud, Westmead Hawk went on to throw a host of big-race winners including Derby champions. He became the leading sire of his generation, just as he had been on the track. He died at the Westmead Kennels in May 2014.