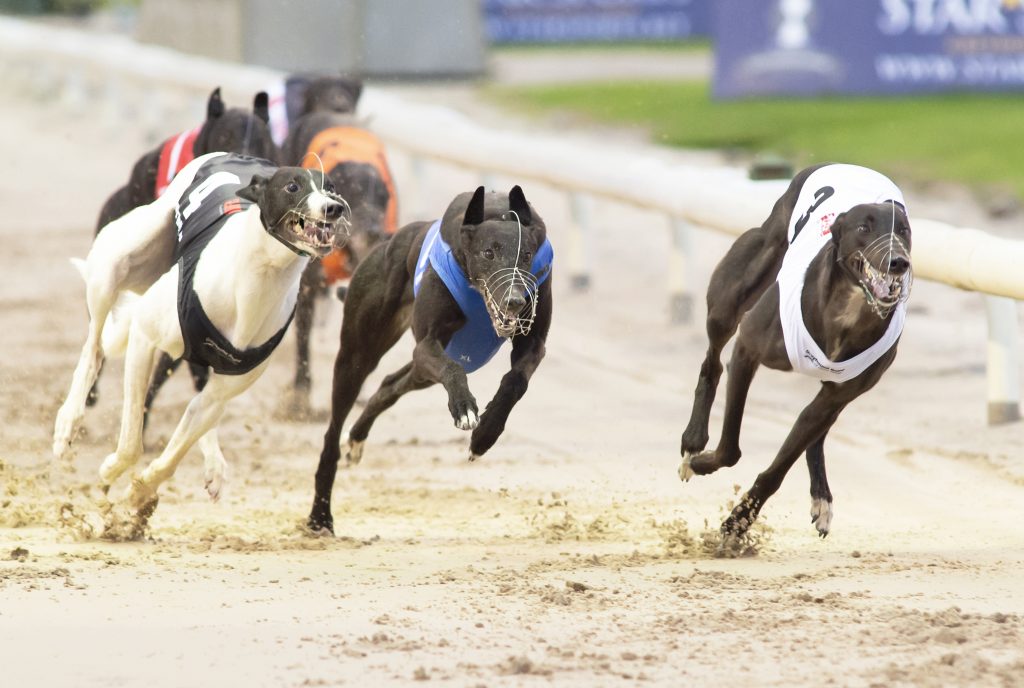 Landing a second English Derby success for Gowran, Co. Kilkenny-based Paul Hennessy and owned by Bryan and Kathleen Murphy, Priceless Blake (pictured above, T3) broke quickly and made the first bend in front, cutting the bend as Magical Bale (Kevin Hutton) paced up inside him before swinging off behind the Irish raider, losing all chance.

Storming clear down the back-straight, much to the delight of those who had snapped up double-figure prices following his well-received trap three draw in Monday’s draw, Priceless Blake had the Derby at his mercy – although in behind compatriots Ballymac Tas (Liam Dowling) and Skywalker Logan (Patrick Guilfoyle) began to close.

Still in charge off the last bend, the October 2016 son of Laughil Blake and What A Diva, bred by Martin Franklin, held on by a half-a-length and a head from the rallying Ballymac Tas and track record-holder Skywalker Logan to win in 29.32sec (normal). Magical Bale was fourth, ahead of Droopys Expert (Angela Harrison) and Clonbrien Prince (Graham Holland).

“I usually keep my emotions in check in the middle, but I started roaring him off the second bend and just had him winning – then I froze solid when I saw both Tas and Logan closing on him,” said Kevin Hennessy, son of the trainer, who paraded the October 2016 whelp and had overseen his campaign along with girlfriend Bethany.

“It was a long run for home, I can tell you!” he added. “However, this dog deserves this. He was so cool on parade and I knew he’d run his race. The draw gave us a chance, we felt. Had (Magical) Bale drawn two, three, four or five we were just coming to enjoy the night – we’d have needed a miracle. Trap one was not great for them – trap three was huge for us.”

His father and winning trainer Paul Hennessy added: “He’s such an honest dog, a great bend runner, and that was just awesome. We won the last English Derby at Wimbledon which was special at such an iconic venue for the sport but this is special, too, because we’ve won the Derby for Bryan and Kathleen (Murphy).

“They are a special couple, longstanding owners,” Hennessy continued. “They live in the Cayman Islands but travelled to Nottingham via a few days in Galway. Tonight was their first visit to Nottingham and it’s proved a long but worthwhile trip. We won a Scottish Derby for them with Priceless Rebel – maybe an Irish Derby would complete the set!”

Hennessy, who was winning a sixth Derby, paid tribute to Liam Dowling – trainer of the runner-up. “Liam was the first to congratulate Kevin and there’s a strong bond between our two families – my daughter Rachel goes out with Liam and Helen’s son Shane. We’ve finished first and second and Liam’s bitch ran a fantastic race.” 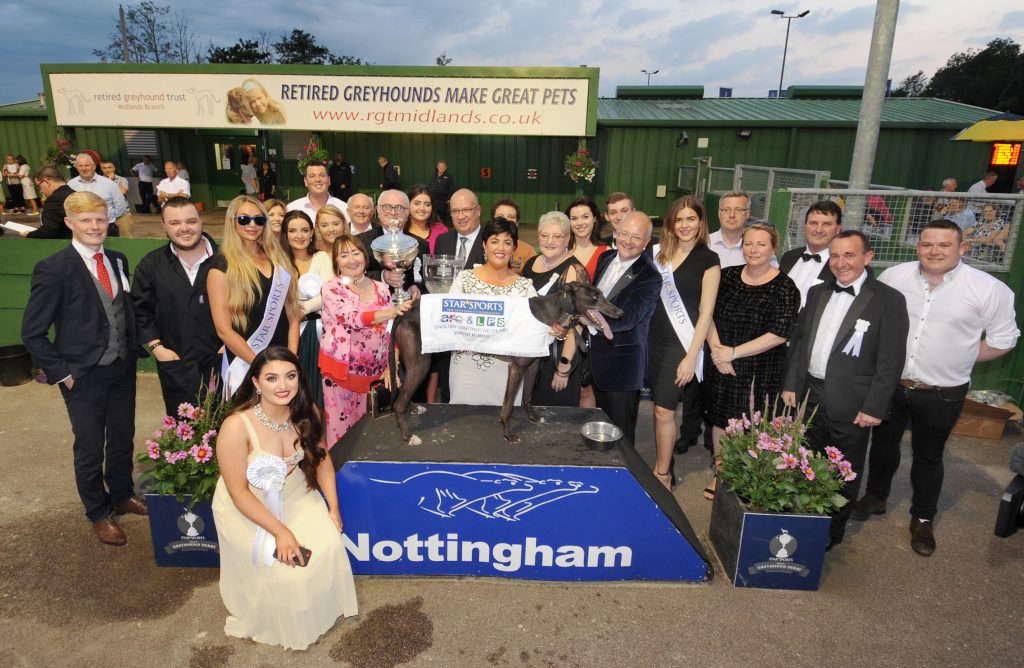 Susan Hennessy, who made the trip to London for the Derby final trap draw at The Ritz along with Martin White, whose kennels the Hennessys used as a base between their Gowran base and Nottingham, thanked Star Sports sponsor Ben Keith for his hospitality at the lunch and for the Nottingham management on the night.

“We were made to feel very welcome everywhere we went and it was great to have the family with us on the night and friends such as Seamus and Ann Gaughan, where we used to stay when the Derby was at Wimbledon and Towcester. It’s been a fantastic week for all of us and, of course, we’ll be back again!”

Winning owner Bryan Murphy accepted a cheque of £100,000 and the famous Derby trophy from the sponsors – Ben Keith (Star Sports), Jon Pullin (Arc) and Richard and Donna Evans (Local Parking Security) – and explained how victory for Priceless Blake had realised a dream.

“When I was younger, I used to talk to my father about chasing dreams – I had two. I was a good runner and won eight Irish championships and wanted to be an Olympic runner over 200m and 400m. I never quite got that far, but my other dream was to win an English Greyhound Derby. Tonight I’ve achieved one of those dreams.”